First Shockk will cover the advances and setbacks in rendering textures onto objects in the game.
Then I’ll cover some more advancements we’ve been making, as well as making a big announcement about the direction of development from now on.

After painstaking work involving rewriting large portions of the renderer, as well as debugging PNG loading errors and ZLib streams and all that guff… drumroll please…

Our game engine finally supports textures! Not just textures, but multiple different kinds of textures! We can render objects with diffuse maps, specular maps, emission maps (technically, but we don’t have any yet), and normal maps too (ditto)! There’s still a bit more work to do before we’re finished with textures, however, as we’re currently facing a few issues we need to resolve.

First and foremost, it looks like our textures aren’t rendering quite correctly… there’s a problem with our texture mapping causing them to, well, mirror themselves or simply not render at all. 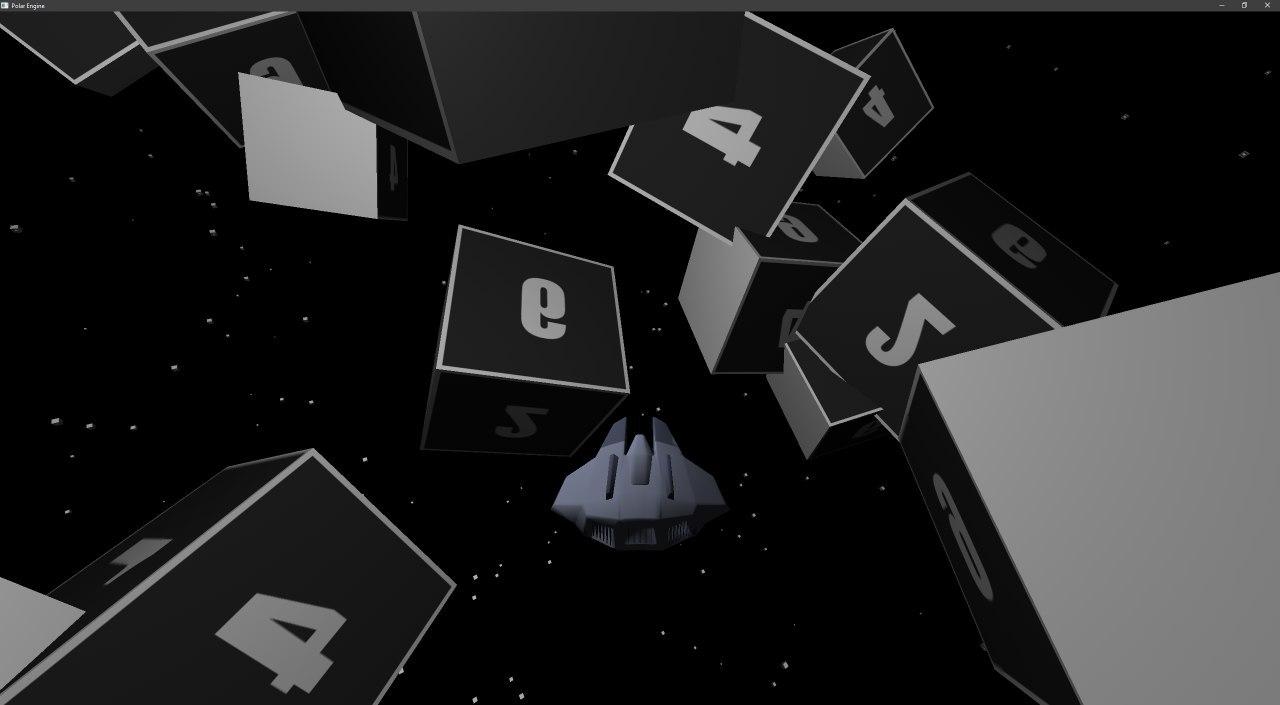 Finally, to properly support normal mapping we’re going to need to rewrite our shader lighting mathematics in tangent space rather than in world space. This can quickly become a very complex topic but I’m hoping to write up a technical post on it (after I write up the last one I was supposed to do 2 weeks ago -_-), where I’ll go into more detail about what tangent space is and why it’s beneficial when trying to use a normal map.

🐰 The Rabbit has been working hard on our models and the textures for the ship and asteroids. They’re being implemented slowly in the engine as we test things and crush some bugs.
Right now we are trying to figure out the PNG loading issues that Shockk mentioned above using a basic textured cube in place of the asteroids as shown.
It’s a bit of a head-scratcher.

Storyboarding and The Universe

My weekend was spent with colleagues working on fleshing out the universe we want to paint, as well as getting the “personalities” of the various corporations down.
We’re happy with the progress we’ve made, and the dark undertones running through the universe we want to create perfectly set up the game we want to make without getting in the way of gameplay.
The work we’ve done also lines us up for our first big change…

Shockk and I have been scratching our heads for… well… 18 weeks about what we actually want the project to be called.
With the advances in the “lore” made over this weekend, we decided on the name “Corporeality”.

A play on “Corporeal” in ironic regard to ships being piloted remotely through consciousness transfer, and a portmanteau of “Corporate” and “Reality”. We bounced around a few ideas, but we just kept circling back to it, and it stuck!

We have a domain registered for it, and the name of “Spacegame” has been updated on our steam page as well.
This blog will be migrating over to the new domain soon, we’ll also be using it internally for server connections.

Everything is starting to feel a bit more real!